At the beginning of October 2015 two postgraduate students from the University of Kent OSA Student Chapter (Yong Hu & Mike Everson) embarked on a weeklong trip to Besançon, France to give a collection of talks to school students.

The trip, organised by Carole Hémard from the British Council, was an effort to introduce young pupils (14-20yrs) to the potential eventuality of working with foreign speaking collaborators as well as taking a break from their usual routine by giving them the chance to meet with professionals and have some fun with science. 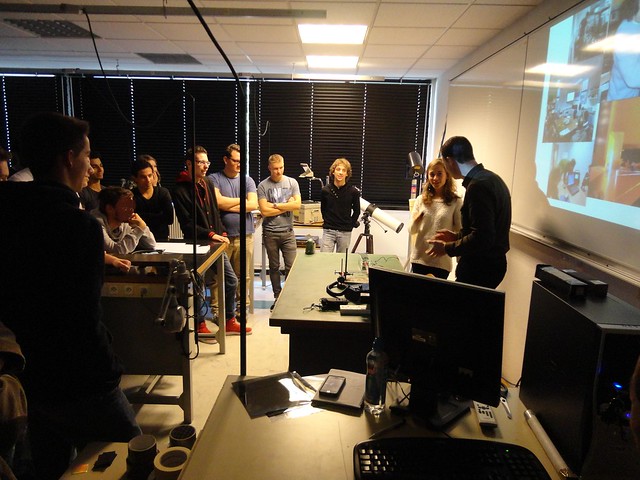 The researchers visited a number of schools in the surrounding areas including Montbéliard, Belfort and Morez where they discovered that regular adjustments to their talks were necessary to suit the abilities of the pupils as well as the varying time frames available at different venues.

The talks focused on the properties of light and its applications in fibre optics, with the use of an interactive demonstration, and spectroscopy, where the pupils made their own spectroscope in a workshop and used them to deduce the elements in four different atomic emission gas tubes. The introduction also gave the pupils some background details about the speakers and how they came to be university postgraduate students, the idea being to show that they can elevate themselves to any position they desire and also to inspire and encourage the pursuit of a career in science.

No trip abroad could possibly take place without a little sight seeing and so the postgraduates were suitably treated to a variety of science museums and expositions, some of which were centred on optics and photonics. Plus they attended the ‘fête de la Science’ in Besançon and met with the director of the International Year of Light (IYL) initiative, Professor John Dudley, as well as many other scientists and professionals in the same subject areas.

Overall the trip was a huge success, justifiable by the large amount of positive feedback returned from the pupils who attended as well as the teachers, inspectors, lab assistants and other onlookers. Now that the right connections have been established with academics through the British Council, the University of Kent’s OSA Student Chapter has the exciting potential to undergo similar outreach activities in the future.

On Saturday, March 14th, several members of the Applied Optics Group and of the OSA student chapter took on the challenge of organising and hosting an outreach event with the support of the School of Physical Sciences at the local city museum, the Beaney House of Art and Knowledge.

Titled "Light up your life - Day of Discovery", this event focused on raising awareness of the importance of Optics and Photonics among the general public, especially since this year has been proclaimed by the United Nations as the International Year of Light (IYL). We had about 100-200 people attending throughout the day, mostly families with children, which made it that more challenging as the way the content was presented had to be changed on-the-fly!

The event couldn't have gone forward without the organisation (and recruiting) from our School's outreach officer, Dr Vicky Mason, to whom we are grateful. She also provided an additional interactive module in the form of a thermal imaging camera (which yielded some interesting thermal "selfies" such as the one below).

Finally, our thanks to all of our colleagues who kindly volunteered to be there on a Saturday: Prof Adrian Podoleanu, Dr Adrian Bradu, Dr Sylvain Rivet, Christopher Costa, Catherine Chin, Manuel Marques, Michaël Maria and Radu Stancu.